2 I urge, then, first of all, that petitions, prayers, intercession and thanksgiving be made for all people – 2 for kings and all those in authority, that we may live peaceful and quiet lives in all godliness and holiness. 3 This is good, and pleases God our Saviour, 4 who wants all people to be saved and to come to a knowledge of the truth. 5 For there is one God and one mediator between God and mankind, the man Christ Jesus, 6 who gave himself as a ransom for all people. This has now been witnessed to at the proper time. 7 And for this purpose I was appointed a herald and an apostle – I am telling the truth, I am not lying – and a true and faithful teacher of the Gentiles.

8 Therefore I want the men everywhere to pray, lifting up holy hands without anger or disputing. 9 I also want the women to dress modestly, with decency and propriety, adorning themselves, not with elaborate hairstyles or gold or pearls or expensive clothes, 10 but with good deeds, appropriate for women who profess to worship God.

11 A woman[a] should learn in quietness and full submission. 12 I do not permit a woman to teach or to assume authority over a man;[b] she must be quiet. 13 For Adam was formed first, then Eve. 14 And Adam was not the one deceived; it was the woman who was deceived and became a sinner. 15 But women[c] will be saved through childbearing – if they continue in faith, love and holiness with propriety.

15 He said: “Listen, King Jehoshaphat and all who live in Judah and Jerusalem! This is what the Lord says to you: ‘Do not be afraid or discouraged because of this vast army. For the battle is not yours, but God’s. 16 Tomorrow march down against them. They will be climbing up by the Pass of Ziz, and you will find them at the end of the gorge in the Desert of Jeruel. 17 You will not have to fight this battle. Take up your positions; stand firm and see the deliverance the Lord will give you, Judah and Jerusalem. Do not be afraid; do not be discouraged. Go out to face them tomorrow, and the Lord will be with you.’”

18 Jehoshaphat bowed down with his face to the ground, and all the people of Judah and Jerusalem fell down in worship before the Lord.19 Then some Levites from the Kohathites and Korahites stood up and praised the Lord, the God of Israel, with a very loud voice.

20 Early in the morning they left for the Desert of Tekoa. As they set out, Jehoshaphat stood and said, “Listen to me, Judah and people of Jerusalem! Have faith in the Lord your God and you will be upheld; have faith in his prophets and you will be successful.” 21 After consulting the people, Jehoshaphat appointed men to sing to the Lord and to praise him for the splendour of his[a] holiness as they went out at the head of the army, saying:

“Give thanks to the Lord,
for his love endures forever.”

22 As they began to sing and praise, the Lord set ambushes against the men of Ammon and Moab and Mount Seir who were invading Judah, and they were defeated.

I’ll go in the strength of the Lord
In paths He has marked for my feet;
I’ll follow the light of His word,
Nor shrink from the dangers I meet.
His presence my steps shall attend,
His fullness my wants shall supply;
On Him, till my journey shall end,
My unwavering faith shall rely.

I’ll go in the strength of the Lord
To work He appoints me to do;
In joy which his smile doth afford
My soul shall her vigour renew.
His wisdom shall guard me from harm,
His power my sufficiency prove;
I’ll trust His omnipotent arm,
And prove His unchangeable love.

I’ll go in the strength of the Lord
To conflicts which faith will require,
His grace as my shield and reward,
My courage and zeal shall inspire.
Since he gives the word of command,
To meet and encounter the foe,
With his sword of truth in my hand,
To suffer and triumph I’ll go.

22 You were taught, with regard to your former way of life, to put off your old self, which is being corrupted by its deceitful desires; 23 to be made new in the attitude of your minds; 24 and to put on the new self, created to be like God in true righteousness and holiness. 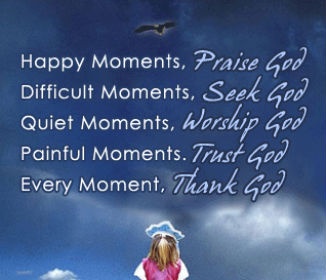 ;
A moment so solemn, yet joyous and new,
Forgiven is all sinning,
Real life is beginning,
For this is God’s moment for you.

A song of prayer and dedication taken from one of the Salvation Army musicals, unfortunately I couldn’t find the words to the verses but as the chorus reminds us God does forgive when we repent from our sins so that our life can begin

I wonder how many of us will get Christmas cards with the two different terms on them 1. Merry Christmas and 2. Happy Xmas.

According to the dictionary the meaning of Merry Christmas is: The real meaning of “Merry Christmas” is, to be full of absolute joy because God Himself, knowing none of us could *ever* get free of sin ourselves, provided the way for our salvation. It is only through God that we can obtain Holiness because none of us are able to cleanse ourselves to the point of pleasing God.

Whereas Xmas (also X-mas) is a common abbreviation of the word Christmas. It is sometimes pronounced, but Xmas, and variants such as Xtemass, originated as handwriting abbreviations for the typical pronunciation. The “X” comes from the Greek letter Chi, which is the first letter of the Greek word Christós (Χριστός), which became Christ in English. The suffix -mas is from the Latin-derived Old English word for Mass.

Personally I prefer the first one of the two

16 Again the word of the Lord came to me: 17 ‘Son of man, when the people of Israel were living in their own land, they defiled it by their conduct and their actions. Their conduct was like a woman’s monthly uncleanness in my sight. 18 So I poured out my wrath on them because they had shed blood in the land and because they had defiled it with their idols. 19 I dispersed them among the nations, and they were scattered through the countries; I judged them according to their conduct and their actions. 20 And wherever they went among the nations they profaned my holy name, for it was said of them, “These are the Lord’s people, and yet they had to leave his land.” 21 I had concern for my holy name, which the people of Israel profaned among the nations where they had gone.

24 ‘“For I will take you out of the nations; I will gather you from all the countries and bring you back into your own land. 25 I will sprinkle clean water on you, and you will be clean; I will cleanse you from all your impurities and from all your idols. 26 I will give you a new heart and put a new spirit in you; I will remove from you your heart of stone and give you a heart of flesh. 27 And I will put my Spirit in you and move you to follow my decrees and be careful to keep my laws. 28 Then you will live in the land I gave your ancestors; you will be my people, and I will be your God. 29 I will save you from all your uncleanness. I will call for the corn and make it plentiful and will not bring famine upon you. 30 I will increase the fruit of the trees and the crops of the field, so that you will no longer suffer disgrace among the nations because of famine. 31 Then you will remember your evil ways and wicked deeds, and you will loathe yourselves for your sins and detestable practices. 32 I want you to know that I am not doing this for your sake, declares the Sovereign Lord. Be ashamed and disgraced for your conduct, people of Israel!

33 ‘“This is what the Sovereign Lord says: on the day I cleanse you from all your sins, I will resettle your towns, and the ruins will be rebuilt. 34 The desolate land will be cultivated instead of lying desolate in the sight of all who pass through it. 35 They will say, ‘This land that was laid waste has become like the garden of Eden; the cities that were lying in ruins, desolate and destroyed, are now fortified and inhabited.’ 36 Then the nations around you that remain will know that I the Lord have rebuilt what was destroyed and have replanted what was desolate. I the Lord have spoken, and I will do it.”

37 ‘This is what the Sovereign Lord says: once again I will yield to Israel’s plea and do this for them: I will make their people as numerous as sheep, 38 as numerous as the flocks for offerings at Jerusalem during her appointed festivals. So will the ruined cities be filled with flocks of people. Then they will know that I am the Lord.’

17 So I tell you this, and insist on it in the Lord, that you must no longer live as the Gentiles do, in the futility of their thinking. 18 They are darkened in their understanding and separated from the life of God because of the ignorance that is in them due to the hardening of their hearts. 19 Having lost all sensitivity, they have given themselves over to sensuality so as to indulge in every kind of impurity, and they are full of greed.

20 That, however, is not the way of life you learned 21 when you heard about Christ and were taught in him in accordance with the truth that is in Jesus. 22 You were taught, with regard to your former way of life, to put off your old self, which is being corrupted by its deceitful desires; 23 to be made new in the attitude of your minds; 24 and to put on the new self, created to be like God in true righteousness and holiness.

25 Therefore each of you must put off falsehood and speak truthfully to your neighbor, for we are all members of one body. 26 “In your anger do not sin”[d]: Do not let the sun go down while you are still angry, 27 and do not give the devil a foothold. 28 Anyone who has been stealing must steal no longer, but must work, doing something useful with their own hands, that they may have something to share with those in need.

29 Do not let any unwholesome talk come out of your mouths, but only what is helpful for building others up according to their needs, that it may benefit those who listen. 30 And do not grieve the Holy Spirit of God, with whom you were sealed for the day of redemption. 31 Get rid of all bitterness, rage and anger, brawling and slander, along with every form of malice. 32 Be kind and compassionate to one another, forgiving each other, just as in Christ God forgave you.

Story behind Silently now I wait for thee,